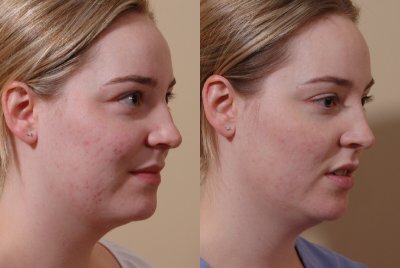 Time, genetics, and many other factors take effect and leave their traces on our skin. Nowhere are these changes more visible than on the face. With the aging process skin of the face begins to sag, volume is shifted and reduce while texture of the skin changes in color, pigmentation, luster and becomes weathered with wrinkling. Crow’s feet wrinkles become evident around the eye area, laugh lines deepen and fine vertical lines “smoker’s lines” appear on the upper lip around the mouth. Fortunately, modern aesthetic, cosmetic techniques are available to address all of the aspects of the aging face. As seen under other heading of this section as well as the non-surgical procedure section, Dr. Zemplenyi is expert in employing multiple modalities to Resurface the skin, Restore facial volume, Relax facial muscles and Reverse gravity-related sag.

At Bel-Red Center for Aesthetic Surgery we have been using various lasers for skin resurfacing of the upper layers of the skin since early 1990’s. Carbon dioxide laser applied in a precise, painting-like, continuous fashion replaced older techniques such as dermabrasion, deep phenol and high-concentration TCA peels in the 90’s as a full face resurfacing modality. In a blood-less field the carbon dioxide CO2 laser generates brief pulses of high-energy light to vaporize the upper layers of skin and heat up the deeper skin layers. The wounded outer layer (epithelium) recovers while new collagen is synthesized in the deeper layers resulting in refreshed, smoother, younger lookng skin. While very successful in significantly improving of skin wrinkles as well as acne scars, full face carbon dioxide laser resurfacing was associated with fairly long wound healing times before the redness of the new skin layer would disappear. Along with some risk of scarring and skin bleaching the full skin resurfacing has been been replaced by the faster healing and much safer fractionation technique.

Since 2009 Dr. Zemplenyi has been the first surgeon in the Seattle area to use the Cynosure SmartSkin TM micro-ablative, fractionated CO2 laser in gentler, low-energy doses to sequentially treat wrinkles such as those around the eyes (crow’s feet). Treatments performed using lower power settings result into a faster recovery– three to six days after each treatment. Fractional coverage of the treated skin surface using fractionated CO2 laser not only allows for faster recovery but also diminishes on the potential complications such as scarring and delayed hypo-pigmentation (abnormally white, blotchy skin). While patients may require several treatments to achieve a pleasing result, the recovery process is ideal for the person not able to take time off work as is required with more powerful laser settings. Higher power settings are still utilized for more resistant problems such as the upper lip smoker lines and acne scars. SmartSkin TM CO2 laser is imported from Italy and is also known in the United States as a DOT SmartXide CO2 laser. The results obtained by this laser system are comparable to other fractionated CO2 lasers such as Fraxel CO2 TM and Lumenis Active FX TM & Deep FX TM lasers as well as the Sciton Pro-fractional TM erbium laser.

Pre-operative bleaching creams and retinoids are often begun about three weeks prior to the procedure, especially in darker skin patients. Anti-viral (herpetic) medications (Zovirax TM or Valtex TM ) are also used in the period immediately before and after the procedure. Segmental fractionated laser skin resurfacing is very well tolerated when performed under topical anesthesia (application of a numbing cream and surface cooling). When the entire face is to be treated at a higher level setting such as for acne scars Dr. Zemplenyi offers his patients to under “twilight sleep” for maximum comfort.

Aquaphor or Alba non-petrolatum jelly TM is applied liberally to the treated skin for several days. Post-operative discomfort is usually very minimal and easily controlled with over-the-counter anti-inflammatory medications such as Ibuprofen. Sometimes we use anti-inflammatory steroids to reduce on redness and swelling. Camouflage cover-up make-up is applied to the healing skin in four to six days. Without make-up the skin remains pink for about three weeks depending on the energy used for the treatment. Use of appropriate sunscreen is mandatory. At the Bel-Red Center for Aesthetic Surgery we also often combine a fractionated CO2 laser treatment with eyelid surgery, facelift or a forehead lift.

Our scar reconstructive treatment options include topical treatments, minimally invasive scar reconstructive procedures and scar revision surgery. When considering scarring revision procedures a person needs to gain an appreciation of the fact that scars cannot be erased or fully removed-they may, however, be improved in appearance. The goal of scar revision is to create a skin surface that is flat and blends better into the surroundings. A flat surface reflects light more evenly without shadowing, is less noticeable and may be further covered-up by application of camouflage makeup.  Click Here To Learn More

Rhinophyma is not a new condition, afflicting persons living in the Middle Ages. Its cause is not entirely known but it occurs in the later stages of acne rosacea. In the early stages of rosacea the skin becomes flushed as blood vessels expand. As rosacea progresses, the skin becomes more sensitive with small bumps forming on the nose, cheeks, eyelids and chin. As damage to the skin’s blood vessels progresses, skin redness becomes long term, the skin thickens, pore size increases and the sebaceous glands (oil glands) become more prominent. While rhinophyma can affect men or women, it is much more common in men — generally occurring in Caucasian men in their 40’s to 60’s.

By creating microscopic punctures in the top layers of skin, micro-needling stimulates the body to repair itself with skin renewal. As the skin heals, fresh collagen and elastin are naturally induced to smooth fine lines, wrinkles and. scars and result in a refreshed tighter skin surface.

There are many scars that warrant special attention from a cosmetic and facial plastic surgeon. Scars can be improved by a variety of techniques. Dermabrasion (surgical sanding) of small surface areas may be the tool used, instead of CO2 laser, to plane down a raised traumatic scar resulting from an old injury or prior surgery.

While scars cannot be completely erased, the surface may be leveled to minimize shadowing and to achieve a smoother appearance. Dermabrasion and scar revision are most often performed under local anesthesia. Initial healing takes 7-10 days followed by a period of some redness.

We Love Our Customers!
Professional, to the point, and expedited the process. Left smiling and Thank you.
Daniel Vargas
Sierra was amazing today and went above and beyond to get me approved for my new 2020 Kia Optima!! She was very patient and professional and made the buying process seamless and quick. I will definitely be purchasing my next car from 5 Star Auto Plaza!!
Ty Lindsey
Perfect person to work with.She got the job done well .Thanks Sierra
Deborah Owens
Sierra was very detailed and went down the line with all of the costs. Will definitely be working with her in the future plus bringing her and 5 Star more business. Great job!
Joey Lou
We worked with sierra and she was amazing helped us get the vehicle that was best for us
jennifer ruff
Wonderful sales experience!
Ahniyah Ervin
Sierra was very friendly and understanding of my situation, and very knowledgeable of the steps to take to be able to help me get in a reliable vehicle at the best monthly rate possible! Process was easy & straightforward with thorough explanation on how the process works. Would recommend coming to Sierra at 5 Star Auto Plaza for any and all your car buying needs!
Robert Martin
Anthony is absolutely amazing!!!!
Amanda Graham
Logan Scharf was a great sales man ! Willing to help
Doneisha Medlock
Sierra was very helpful from the start and stayed thru the whole process. 5 star auto is a fantastic place to shop for a new ride.
Anthony Walthes
↑